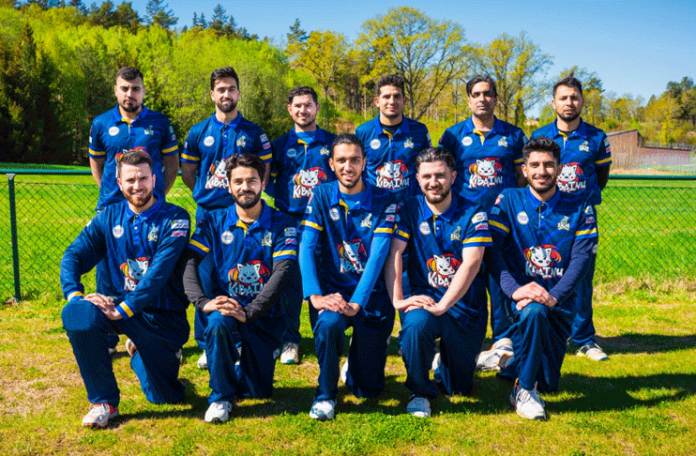 STOCKHOLM: Global Zalmi’s team Alby Zalmi stormed into the final of the ongoing European Cricket League Series by defeating Umea in the third quarter-finals by 15 runs.

Batting first, Alby Zalmi managed to post a decent total of 91/7 in the allotted 10 overs, thanks to the blistering knocks of Azam Khalil and Zia Alozai.

The side were off to a poor start as they lost two wickets in quick succession as the openers Ismaeel Zia and Samiallah Khalil departed after scoring five each.

The blistering knock of Azam then bolstered the side in a commanding position as he scored a quickfire 21 off just 10 balls with the help of three boundaries and a six. Zia, on the other hand, also shone with his late onslaught as he top-scored for the side with 26 off just 16 deliveries, laced with two boundaries and as many sixes.

For Umea, Gopinathan Malavalan led the way with two wickets, while Sohail Adnan, Tahir Mujtaba, and Amir Husseini made one scalp each.

Set to chase 92, Umea could only score 76/7 in the allotted 10 overs despite a brilliant 36-run knock by the opener Sohail as the rest of the batters remained unable to contribute significantly.

Azam starred with the ball for the Zalmi as he picked three wickets for a mere two runs in his quota of two overs, whereas, Qudratullah Mir Afzal picked two wickets for 12 runs.

The Zalmi will now take on Botkyrka in the final of the European Cricket League Series 2022.

READ: Babar Azam voted as the best-ever Somerset T20 player by the fans