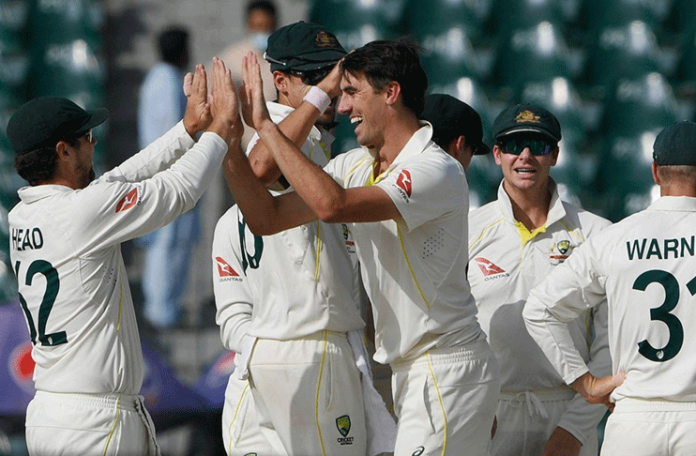 LAHORE: Australian pacers Pat Cummins and Mitchell Starc wreaked havoc over the Pakistan batting line-up dismissing the home side on 268 to hand their team a massive lead of 123 runs before the openers take the touring side to 11/0 at the stumps on day three of the ongoing third Test.

After bowling out Pakistan on 268, Australian openers Usman Khawaja and David Warner could only bat for three overs. The openers took their side to 11/0 before the umpire dislodged the bails to call off the day.

Khawaja (7*) and Warner (4*) will now resume the proceedings for the touring side on the fourth day of the third Test. The touring side currently has a massive lead of 134 runs.

On the other hand, Pakistan had a forgetful third session as the touring bowlers wreaked havoc over their batting lineup. The home side lost all their remaining seven wickets and could only manage to add 41 runs after the Tea break.

Australian captain Cummins led the way with a five-for, while Starc followed back with four. Nathan Lyon, on the other hand, made one scalp.

Coming out to bat after tea, the home side soon lost their fourth wicket as the left-arm pacer Starc castled Fawad Alam on 13.

Following his departure, the side began to lose wickets at an alarming rate. Babar Azam, who was standing firm at the other end, also became the victim of the collapse as he lost his wicket to Starc after scoring 67.

The home side’s batting tail had no answers to the Australian bowling attack as Nauman Ali, Hasan Ali, and Naseem Shah bagged ducks. Mohammad Rizwan and Sajid Khan, on the other hand, scored one and six respectively.

Following the match-defining collapse, Pakistan bowled out on 268; handing a massive 123-runs lead to the Kangaroos.

The second session of the third day turned out to be an eventful one as the visitors removed both set batters Abdullah and Azhar, while the home side added 68 runs at 2.7 runs per over.

The top-scorer for the home side – Abdullah walked back to the pavilion in the fourth over of the second session as Nathan Lyon removed the former for 81. He faced 228 balls and smashed 11 boundaries.

Later, Azhar also made his way back a few overs before the Tea break as Australian captain Pat Cummins took a screamer off his bowling to remove Azhar for 78. The right-handed batter 208 deliveries and hit eight boundaries including a six.

In the morning session, the set pair of Abdullah and Azhar resumed at an overnight score of 90/1, extending their important partnership by adding a further 69-runs; making sure that the home side do not lose any wicket. Pakistan added 69 runs at a decent rate of 2.4.