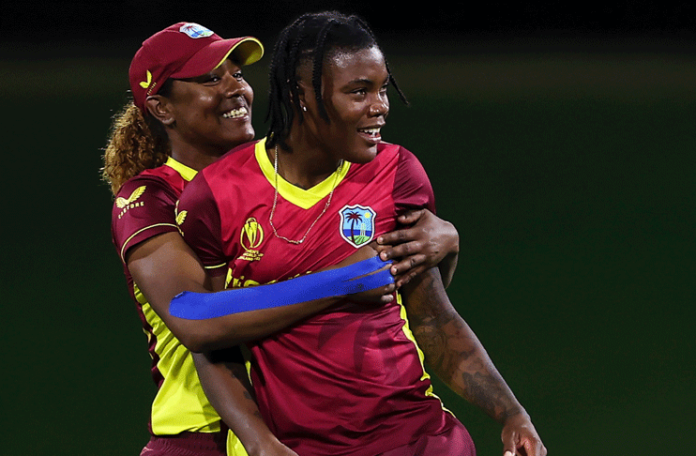 MOUNT MAUNGANUI: West Indian pacer Deandra Dottin held her nerve calm to defend six off the final over to steer her side to a thrilling victory by three runs in the first match of the ICC Women’s World Cup 2022 against the hosts New Zealand, here on Friday.

The first match of the ICC Women’s World Cup 2022 went down to the wire with the West Indies emerging out as victorious.

The home side needed just six off the final over with their set batters Katey Martin and Jess Kerr on the crease. The West Indian skipper Stafanie Taylor picked Dottin to bowl the penultimate over and she, after removing both the set batters steered her side to a thrilling victory. Dottin’s two wickets and a run-out at the non-striker ended New Zealand’s hopes to taste their maiden triumph in the opener.

Set to chase 260, the hosts New Zealand could only manage to score 256 before being bowled out in the final over.

The White Ferns were off to a poor start to the run chase; losing their first wicket for a mere 14 as Suzie Bates departed after scoring cheaply. Following her departure, the side kept losing wickets at a consistent rate.

Sophie Devine, on the other hand, stood firm at the other end and kept the scoreboard ticking single-handedly and went on to score a magnificent century. She appeared top-notch before perishing in the 45th over after scoring 108 off 127 balls with the help of 10 boundaries.

Apart from Sophie, Katey and Kerr showed resistance down the order; scoring a 40-runs partnership, which eventually broke in the final over as Dottin trapped Katey in legs for 44. Similarly, Jess too fell short of the right-arm pacer as she lost her wicket on the second last bowl of the over after scoring a gritty 25.

For West Indies, Dottin, Anisa Mohammed, Hayley Matthews bagged two wickets each, while Shakera Salman and Chinelle Henry struck out a batter each.

Batting first, West Indies finished at 259/9 in the allotted 50 overs, thanks to Matthews’s magnificent century. The right-handed batter carried her bat till the 45th over and scored 119 off 128 balls with the help of 16 boundaries and a six, while the rest of the batters also made valuable contributions to take their side to a commendable total.