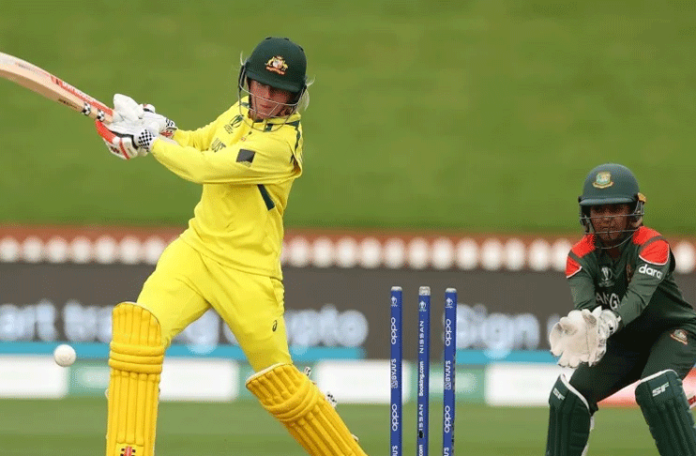 WELLINGTON: Australia’s middle-order batter Beth Mooney starred with a valiant 66 not-out in the run chase to help her side continue their unbeaten run by defeating Bangladesh in the 25th match of the ongoing ICC Women’s World Cup, here on Friday.

The defending champions Australia kept their unbeaten run on the track as the side beat Bangladesh by five wickets in a rain-affected match.

Set to chase a mere 136 in 43 overs, the side was off a poor start as they lost half of their side for a mere 70 on the scoreboard.

Australia’s middle-order batter Mooney then showed grit and anchored the run chase with her sensible knock. She faced 75 balls in the course of his astonishing knock and scored an unbeaten 66 with the help of five boundaries.

The right-handed opener Annabel Sutherland also chipped in with her 26 off 39 balls and put on an unbeaten and match-winning 66 runs partnership with Mooney to steer her side to the victory.

For Bangladesh, Salma Khatun led the way with three wickets, while Nahida Akter and Rumana Ahmed made one scalp each.

Batting first, Bangladesh could only manage to score 135/6 in the allotted 43 overs as Australian bowlers kept things tight and did not allow them to score freely.

Lata Mondal top-scored for Bangladesh with 33 in 63 deliveries, while Sharmin Akhter followed back with 24 off 56 balls. The rest of the batters, on the other hand, failed to make significant contributions despite facing a lot of deliveries.

For Australia, Ashleigh Gardner and Jess Jonassen bagged two wickets each, while Sutherland and Megan Schutt struck out a batter each.