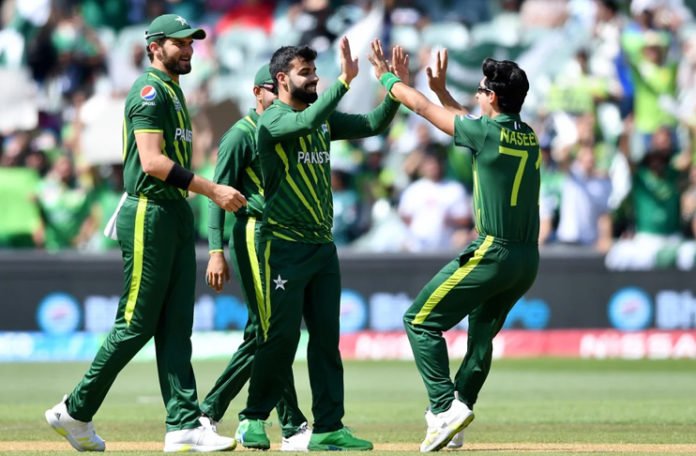 ADELAIDE: Pakistan came from behind to book the semifinal berth of the ICC Men’s T20 World Cup 2022 in an interesting turn of events on an action-filled Sunday as they beat Bangladesh by five wickets.

The two teams were competing for the semifinal spot in a virtual knockout game after Proteas had earlier faced an upset defeat at the hands of the Netherlands in the first fixture of Sunday’s tripleheader, which eliminated South Africa from the race for the final four.

Shaheen Afridi stormed through the lower middle order as he grabbed four wickets aiding Pakistan to restrict Bangladesh to 127/8.

Set to chase a meagre target, Pakistan batters held their nerves strong as the opening pair of Babar Azam and Mohammad Rizwan raised a cautious 57-run partnership in 63 balls before young Mohammad Haris played a superb cameo of 18-ball 31 to steer Pakistan to a comfortable position in the chase.

Skipper Babar fell prey to left-arm spinner Nasum Ahmed after scoring 25 off 33 in the 11th over while Rizwan (32 off 32) followed the suit and got caught at the point in the very next over when he tried to slash medium pacer, Ebadot Hussain.

Shan Masood, on the other hand, chipped in with a skilful unbeaten 24 off 14 to take the side home.

Opting to bat first, Bangladesh failed to post a big total on the board thanks to phenomenal death bowling by the Green Shirts who offered just 21 runs while taking four wickets in the last four overs of the innings.

Left-arm pacer Shaheen produced his best bowling figures since coming back from an injury in the tournament as he returned 4/22 in his four overs quota.

Opener Najmul Hossain Shanto top-scored for his side as he played a cautious knock of 54 off 48 laced with seven boundaries while the Pakistan bowlers tested Bangladesh batting throughout the innings.

Shaheen provided the first breakthrough to Pakistan as he got rid of danger man Litton Das, who played a sensational knock in the previous game against India, in the third over after he scored 10 off 8.

Soumya Sarkar then joined Shanto on the crease and anchored the Bangladesh innings with a valiant 52- run partnership to take the scoreboard 73/1 in 10.2 overs before leg spinner Shadab Khan made back-to-back strikes to jolt the batting line.

Sarkar was taken at the point after he scored 20 off 17 while skipper Shakib Al Hasan walked back on golden duck after a confused leg before wicket while the third umpire also nodded to the onfield umpire’s decision.

Following the debacle, Bangladesh remained unable to control the damage as they started to lose wickets at regular intervals with the last five batters failing to reach the double figures.

For Pakistan, apart from Shaheen, Shadab pocketed two wickets while Haris Rauf and Iftikhar Ahmed also took a scalp each.