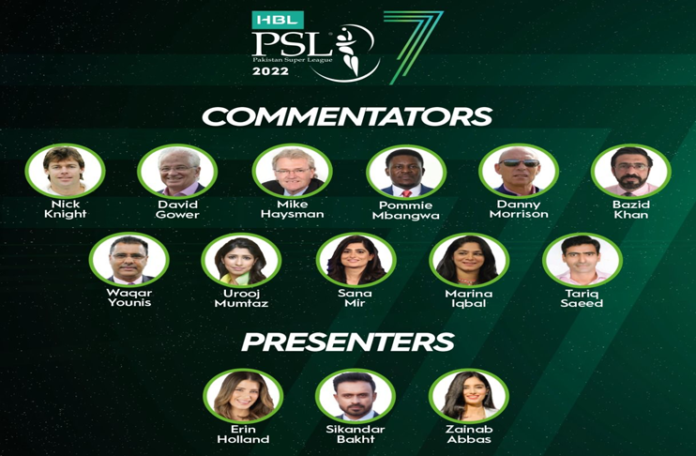 LAHORE: The Pakistan Cricket Board (PCB) has unveiled the commentary and presenters panel for the upcoming seventh edition of the Pakistan Super League (PSL), Nick Knight and Mike Haysman also included.

In a press release, PCB revealed that former England and South African cricketers and well-known commentators Knight and Haysman respectively will be commentating for the first time in the HBL PSL 7.

Another English commentator, Dawid Gower, who has already commentated in the PSL once, will comment in the first phase of the league to be played in Karachi. Gower, however, will then be replaced by infamous New Zealand’s commentator – Danny Morrison for the second leg of the super league in Lahore.

Renowned Zimbabwean commentator Pommie Mbangwa will also be available for the first round of the league only.

Taking to Twitter, the PSL also shared the commentary panel for the upcoming edition.

🚨 Commentators & Presenters Panel for the #HBLPSL7 🚨

Furthermore, apart from foreign stars, former Pakistan cricketers and prominent commentators will also be part of the commentary box to comment on the upcoming live-action at National Stadium Karachi and Gaddafi Stadium Lahore.

Furthermore, Erin Holland will be returning to the super league as a presenter, while Zainab Abbas and Sikandar Bakht will host pre-match and post-match shows.

It is worth mentioning here that the seventh edition of the HBL PSL will commence on January 27 with the defending champions Multan Sultans taking on the former champions Karachi Kings in the league’s opener.

READ: ‘We could not finish previous seasons on a high’ Wahab Riaz