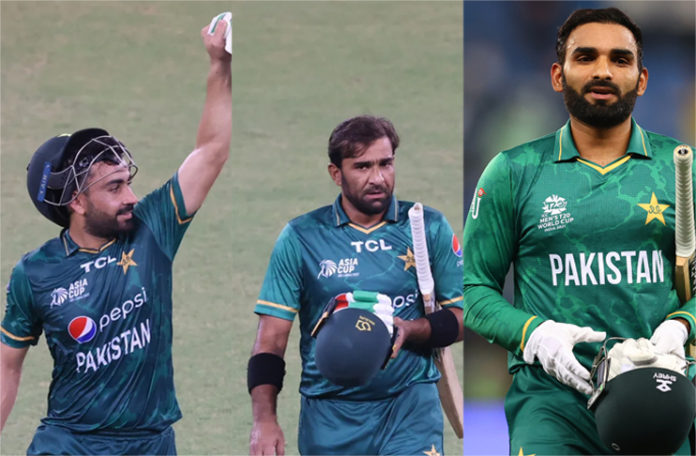 Consistent middle-order failures have now become a pertinent headache for the national team as after having a disastrous Asia Cup 2022, the Green Shirts could not recover from the same issue in the recently-concluded series opener of the historic home T20I series against England.

Pakistan’s middle-order failure is a case that needed to be addressed at the earliest as the biggest event of the year – ICC T20 World Cup 2022 – is nearing in and the national team, as of yet, could not find the combination.

In the first T20I against England, Pakistan tried a different middle-order compared to that of Asia Cup 2022 by recruiting Haider Ali at number three, Shan Masood at four, and Iftikhar Ahmed at five.

But, the change in the batting combination failed to address the issue, the national team has been going through for a long time now.

Khushdil Shah who is a part of the national team as a finisher came to bat at number seven but he, too, failed to live up to his playing role and slog the ball big in the death overs.

Pakistan’s opening pair of captain Babar Azam and top-ranked T20I batter Mohammad Rizwan gave the hosts a flying start in the first T20I after facing a lot of criticism for their slow approach and strike rate.

Pakistan, as a result, were 104/1 in the first 12 overs, but in the last eight overs, six wickets fell and only 54 runs were scored courtesy of yet another failure of the middle-order.

Khushdil, who is in the team for power-hitting, somehow makes his way into the playing XI every time despite continuous failures, and could score a mere five runs off seven deliveries with a paltry strike rate of less than a hundred.

But this is not the first time, if you look at the last 10 innings of Khushdil, it does not include a single big knock against top-ranked sides, nor could he score a fifty in his T20 career.

Now the question is, how long will Khushdil continue to get opportunities? How does he get into the team? Are power hitters like that? We have a bunch of power hitters but none comes in handy when needed.

Asif Ali and Iftikhar, on the other hand, are also part of Pakistan’s middle order but their performances also lack consistency.

Combining all of these elements, it is safe to say that Pakistan are in a dire need of addressing their middle-order failures by making a dependable combination ahead of the ICC T20 World Cup.