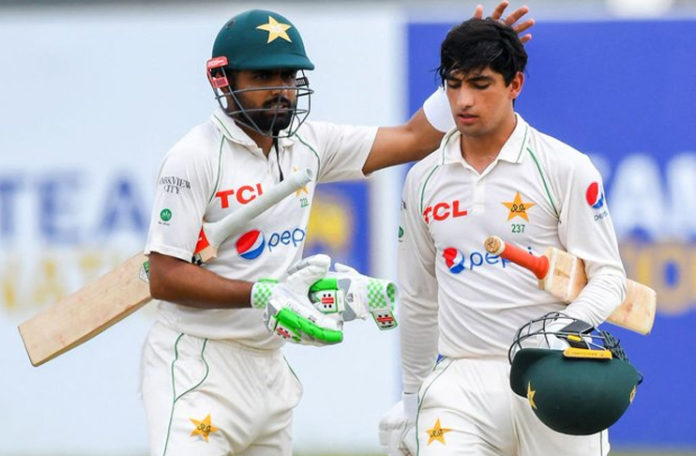 GALLE: National team skipper Babar Azam shone with an astounding century to propel the team out of the crisis as Pakistan raised 218 runs in the first innings before Sri Lanka managed 36/1 at the end of the second day’s play in the first Test, here on Sunday.

The skipper marked his seventh Test hundred and reached the milestone of 10,000 international runs during his crucial knock of 119 runs before he was dismissed by right-arm spinner Maheesh Theekshana in a leg-before wicket.

Apart from Babar, the rest of Pakistan’s batters remained helpless in the face of the Sri Lankan spin attack as the team was struggling on 148/9 before a phenomenal 70-run last-wicket partnership between the skipper and the tail-ender Naseem Shah.

Babar remained the major runs contributor in the gritty 10th wicket stand while Naseem put up a strong resistance not to offer his wicket.

Sri Lanka started their second inning with a four-run lead and were off to a solid start before Mohammad Nawaz struck in the second last over to remove the skipper Dimuth Karunaratne on 16.

Earlier in the day, Pakistan underwent complete batting chaos after resuming with the overnight score of 24/2. Jayasuriya got rid of Azhar Ali on just the third ball as the play resumed on the second day with a half-an-hour delay.

Wicket-keeper Mohammad Rizwan and skipper Babar Azam then put up some resistance and made a partnership of 41 runs before Rizwan fell prey to Ramesh Mendis on a total of 64.

The next three wickets fell in quick successions as the left-arm-spinner struck down the debutant Salman Agha on meagre 5 runs, before taking back-to-back wickets of Mohammad Nawaz and Shaheen Shah Afridi.

Yasir Shah combined briefly with Babar before he fell prey to Theekshana on 18 after Lunch while Hasan Ali was sent back to the pavilion by Ramesh Mendis on 17.

Earlier, Sri Lanka finished the opening day of the first Test in a relatively comfortable position dismissing the opening pair of Abdullah Shafique and Imam-ul-Haq cheaply after their batters could only muster 222 in the first inning.