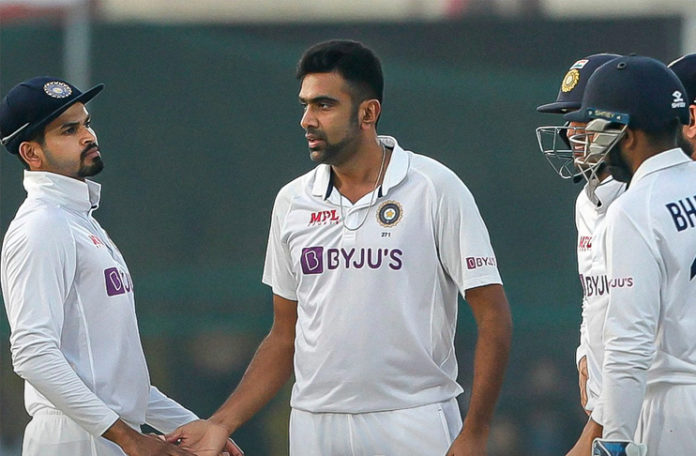 Resuming at an overnight score of 14/1, Mayank Agarwal (4*) and Cheteshwar Pujara (9*) resumed the proceedings for India on day 4. The Blue Caps could not start their day to the fullest as both the batters were sent back to the pavilion after adding a few runs into their previous score. Pujara was dismissed on 22 by Kyle Jamieson. Out of form Indian standing captain – Ajinkya Rahane could not stay long enough on the crease as he was trapped in legs by Ajaz Patel for 4. Soon after, Mayank was dismissed by Tim Southee on 4. Indian all-rounder – Ravindra Jadeja bagged a duck as he was trapped in legs by Southee.

India were in all sorts of trouble as the side lost four wickets for just 37 runs at the start of day-four. Iyer and Ravichandran Ashwin put on a useful 52-runs partnership to pull India out of trouble. Ashwin was dismissed for 32 as he was bowled by Jamieson. Saha joined Iyer and put on a brilliant partnership of 64-runs before Iyer was dismissed on 65 by Southee. Saha remained unbeaten on 61 as India declared their innings on 234/7 and set 284-runs target for Black Caps.

Southee and Jamieson took three wickets each, while Patel dismissed one batter.

New Zealand started their run chase in the last session with just four overs left for day-four. Kiwi openers could not manage to give a solid start to their side as their opener Will Young was dismissed on 2 by Ashwin. Opening batters Tom Latham and Will Somerville will resume the proceedings for the Kiwis on the final day as their side are currently 4/1.