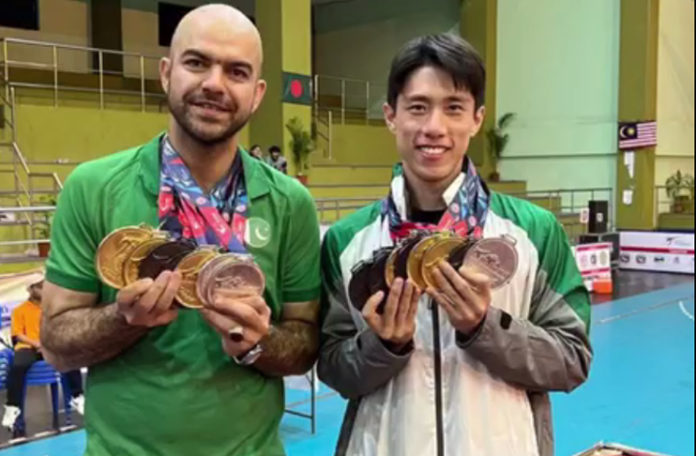 Pakistan’s gold tally in the event reached six after these remarkable wins.

Meanwhile, Haroon Khan and Arbaaz Khan secured the silver medals in the championship.

In the final of the 87-plus category Kyorugi event, Hamza Saeed outclassed the Indian opponent Gaurav Bhatt by 11-2 in the first round and 11-4 in the second round.

Mazhar, on other hand, triumphed in the 80-category final as he beat India’s Rishab after a thrilling competition. Mazhar outpowered the opponent in the first round by  9-7, who then came back strongly and claimed the second round 8-3.

However, in the third round, Mazhar upped the ante and unleashed a vigorous attack to knock down the Indian opponent with 9-0.

It is worth mentioning here that Pakistani athletes bagged three golds, two silver and two bronze medals in the Kyorugi event of the Championship.

Whereas, in the Poomsae event the national athletes won three golds, a silver and four bronze medals.

They hoped that these remarkable accomplishments would prove beneficial for the athletes as they prepare for the Combaxx Asian Championship scheduled in Islamabad in November later this year.