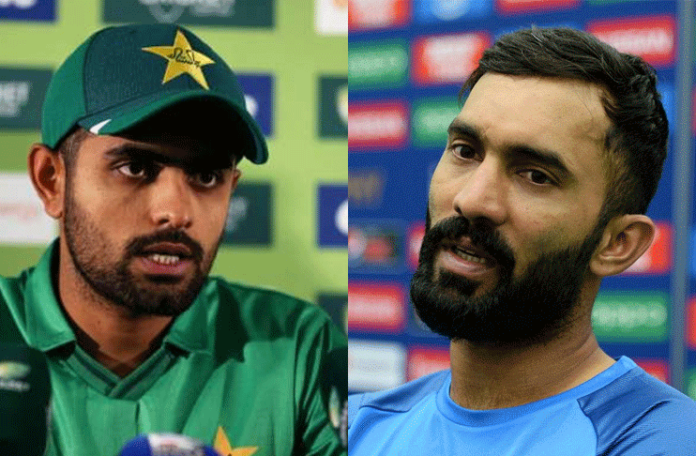 LAHORE: Pakistan’s all-format captain Babar Azam reacted to the praiseful comment made by the Indian wicket-keeper batter Dinesh Karthik regarding him.

Karthik, while featuring in the latest episode of the ICC Review last month, hosted by Sanjana Ganesan, made a major prediction regarding the Pakistan captain; claiming the latter has all the potential and capabilities to become the top-ranked batter across all formats.

“One-hundred per cent (he is capable of achieving that). He is a high-quality player who is at the peak of his batting prowess and he has got some Test matches coming up,” Karthik stated.

“He has been phenomenal in all three formats of the game and he has done well in different batting positions too. I wish him all the best and think he has the potential. He has got all the following of Pakistan helping him in abundance to go on and do special things for his country,” Karthik maintained.

Babar, on the other hand, reacted to the praising comments of Karthik regarding his future, in response to the question of a reporter: “Cricketers worldwide are in awe of your batting, and Dinesh Karthik has even said that you can become No. 1. Do you think you can get there, and if yes, what are you doing to achieve it?”

In response, Babar stated that as a player it is his dream to achieve this astounding feat and highlighted the factors that go into becoming No. 1.

“Definitely, as a player, it’s a dream to become the No. 1 in all formats and for that, you have to focus and put in hard work. It’s not like if you are the top player in 1 or 2 formats, you go easy,” he stated.

“If you are to become No.1 in all three, you have to keep yourself fit and on track. There is back-to-back cricket and the gap is less. For that, you need to be extra fit. It’s something I am preparing for. It’s going well in white-ball and hopefully, I will be able to do well in Tests too,” he concluded.

It is pertinent to mention here that Babar is currently the top-ranked batter in both ODIs and T20Is. In Tests, however, the Pakistan captain is ranked fifth behind Marnus Labuschagne, Steve Smith, Kane Williamson and Joe Root.