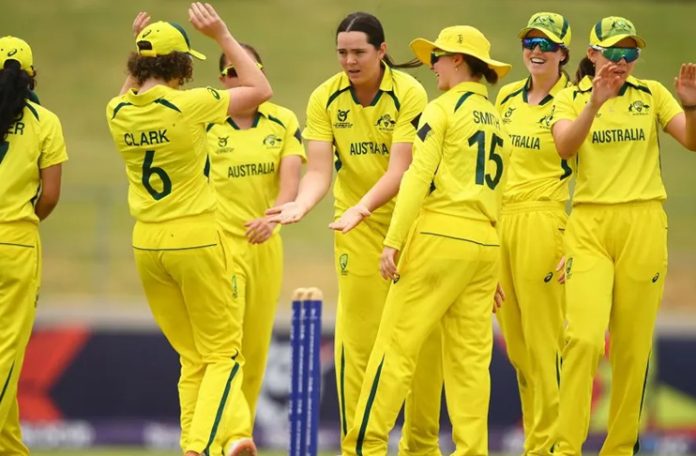 BENONI: Australian bowlers displayed phenomenal all-round performance to bundle out Sri Lanka for just 51 runs and seal a comprehensive 108-run victory in the Group A encounter of the ICC U19 Women’s T20 World Cup, here on Wednesday.

Middle-order batter Ella Hayward’s 36 off 31 and useful contributions from openers Kate Pelle and Sianna Ginger helped Australia reach 159/5 in the allotted 20 over after they were put to bat.

Amy Smith and Lucy Hamilton, however, contributed 22 runs each in the latter part of the innings to put Australia at ease.

In reply, Sri Lankan batters struggled to fire in and except for Nethmi Senarathna, who barely made it into double figures, none of their batters advanced beyond the single-digit.

Meanwhile, in another Group A fixture, Bangladesh claimed their third consecutive victory as they beat the USA by five wickets.

Bangladesh bowlers peeved USA batters, giving them no chance to free their arms, and restricted the side to 103/4 after opting to bat first.

Bangladesh, however, chased the meagre target in the 18th over with 15 balls to spare.

While Aditiba Chudasama and Snigdha Paul earned early breakthroughs for the USA, Shorna Akter and skipper Dilara Akter anchored the Bangalesh’s chase with 22 and 17, respectively. Rabeya Khan, on the other hand, made an unbeaten 18 from 24 balls to take his side home.